Casa la Cabra is located in the charming mountain-top, white-washed, village of Moclín, surrounded by traditional Andalusian olive groves and views of the Sierra Nevada range.

Guests have access to this historic village's amenities with the castle, bars, main plaza, and Camino Mozarbe de Santiago less than a five minute walk from the door. 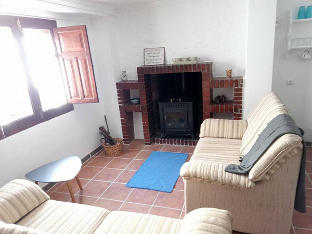 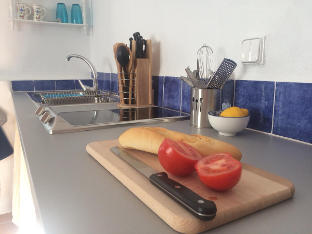 Everything was just perfect in this little cute appartement!

Wish we had stayed longer
The studio flat with its own little court yard, adjacent to a typical Spanish town house was beautifully renovated and perfectly adequate for our stay. The beds were comfy, the kitchen fully equipped and the host wonderful. She contacted us on the day to make sure tha(…)

Host was friendly and helpful and it was a nice touch to provide a bottle of wine and some pastries. Well placed for the local walk (which we visited especially for).

Steve and Sarah were lovely and helpful. very good value.

Great little apartment with perfect facilities and a very welcoming host in beautiful Moclin. Highly recommended on the Camino Mozarabe.

Great place to stay. Central location, close to village amenities; shop and bar. Apartment is quiet, clean, spacious, and has everything needed for a comfortable stay. Enjoyable outside patio. Many different walking routes in the area.

So clean and friendly.

Everything was complete for a retreat. High quality furnishings and things, with lots of attention to detail to make it comfortable and stylish. Free bottle of wine. Lovely kitchen. Good heating (it gets cold at night). They also did my washing for me 🙂

Very well decorated accommodation, very nice fireplace for this time of the year. Very nice view from the terrace – We were very well received and advised

Amazing town location. Great apartment with all the facilities we needed.

Steve and Sarah were very welcoming and extremely helpful and obviously wanted us to have a good holiday. The place was well equipped for food preparation and cooking and it was very comfortable.

Steve's place is a jewel in the moutains. Nice, comfortable and clean. Strongly suggested to friends and family.

Lovely apartment in beautiful Moclin. Very peaceful. Great hikes in the area. Good bed and you have plenty of space to cook your own meal. There are also a few restaurants in the area.

Great place! Great hosts!
Sarah and Steve are awesome! Both communicated promptly, answering questions and letting me know what to expect during the town fiesta. Sarah found me transportation to the nearest village with bus service on a Sunday. The apartment was clean and comfortable with ever(…)

Lovely little town, Steve was a gracious host, went above expectations to make me feel comfortable. The room is spacious and clean and kitchen easy to use. Since there wasn’t an open restaurant during my brief stay he took me to a nearby town for groceries.

Tranquilidad a 45 min de Granada ciudad.
The town, Moclin, is very beautiful and there is the possibility to make routes through the surroundings. The apartment is separate from the owners’ housing and therefore there is enough privacy. Nice owners.
Not being able to use the fireplace in the (…)

Thank you for the hospitality. 😉

A very large room with a fully stocked kitchen and a living room area with a fireplace. Nice host and I can really recommend that place.

Excellent welcome from Steve. The apartment is very nice, quiet, clean and well maintained. The kitchen is well equipped. The beds are very comfortable . Upon arrival, a bottle of wine and a bottle of water, + sweets waiting for us We highly recommend this apartment. The price is very reasonable.

Highly recommend this Casa Rural to anyone choosing to visit Moclín…

All the facilities you need, the owner helpfully drove me down to the nearest supermarket for supplies

Was the best place on our trip through Andalusia so far. Perfect friendly hosts and cute little dog. Comfortable biiiig bed, nice clean shower, chimney, heater/climate, super stuff in kitchen. Perfect village for walks through the countryside 🙂 If you sit in the morning for breakfast on the te(…)

Why book your apartment directly?

Things to do in and around Moclin:

The castellated, white-washed village of Moclín is situated atop a mountain, around 30km from the city of Granada. Its name is derived from Arab-Hispanic roots. Legend suggests that the name is taken from ‘Hisn al-Muklin’ – fortress of the pupils – indicating the castle’s strategic importance in the defense of the Alhambra. Indeed, one can see Moclín from the Alhambra, particularly when the castle is lit at night.

Moclín Castle sits above the village behind two defensive walls, the outer of which also encloses the church – the Encarnación de Moclín.

The current castle, built in the mid-14th century, utilizes a much older site, and is located 1,100m above sea level. It is surrounded by its own defensive network of watchtowers, which can be visited in the surrounding area. The castle played a vital strategic role controlling the route between Alcalá la Real and the Vega de Granada. Finally passing into the control of the Catholic Monarchs in 1486, following the end of a six-year siege.

The church houses the Santuario del Cristo del Paño. The image of Cristo del Paño, an oil painting, was carried as a standard by the army of the Catholic Monarchs during the Reconquest. It was passed to the population of Moclín for their strength and support during the siege.

The Romería del Cristo del Paño is celebrated every 5 October, when the painting is carried through the streets of the town.

A visit to Moclín is not complete without hiking the Ruta del Gollizno. The path utilizes a section of the Camino Mozárabe de Santiago, before winding through a natural gorge created by the Río Velillos, and back up the mountainside to Moclín.

Available for all apartments:

THIS IS IMPORTANT - Remember that all guests (over the age of 16) must show their ID (TIE or DNI) or Passport to identify themselves at the time of arrival.

Children and beds:    Children are not allowed (this property is not suitable for children).

Parties:    Parties / events are not allowed

Age restriction:     The minimum age for check-in is 18

Smoking:    Smoking is not allowed.

Dogs:    Dogs are not allowed.

Other pets:  Cats and other pets are not allowed.